“Consider the lilies, how they grow: they neither toil nor spin; and yet I say to you, even Solomon in all his glory was not arrayed like one of these.” – Jesus Christ

About 8 years ago, the day before leaving on a week’s break along the coast, we had an Exco meeting where we spoke about cost reductions, and the potential need to retrench some people.  It freaked me out, but while driving on holiday I noticed something.  It was August – almost springtime in South Africa – and the road was lined with wild lilies growing just..wherever.  The place we had rented to stay in had a bit of wild bush in front of it, with many wild lilies growing there.  I saw them every day, and during this time I was consistently reminded of Luke 12:27, quoted above.  Since then, these wild lilies have become a symbol of God’s provision for me.

Since that August 8 years ago I have embarked on various exciting journeys, none of which were sure things or safe.  There were many ups and many downs; there were times I had to rationalize, down-scale, forego some luxuries.  But I was never without.  Another reminder of the lilies of the field.

Then came 2020 – the year that we are still trying to figure out.  I had my share of ups and downs in this year – reduced salary and subsequent retrenchment, resulting in a spurt of energy to resurrect my coaching business, near immediate 2-day a week project, wrote and published my book, Decision Point, and a lot of help along the way.  I also had friends who lost loved ones, a previous work colleague succumbing to the COVID19, and a number of others ill.

In spring we came across a field full of lilies, and I had been wanting to have a picture with me in a field of lilies as a reminder.  So we got out and took the picture.  It was only later that I noticed the t-shirt I was wearing and the profound message in the picture – La Linea vs the Lilies of the Field.

La Linea is a brilliant Italian cartoon from the 1970’s (see here on Youtube).  In it, the character walks along a line and is happy and laughing when things go his way, but becomes really obnoxious when they don’t.  Then he goes into an indignant rage at the creator of the cartoon about the things that are happening to him.  Sound familiar?  And so the t-shirt shows La Linea demanding to know from his creator what 2020 is all about, indignant and feeling fully entitled to an explanation.  And it better be a good one at that!

And isn’t that the dilemma we are so often faced with?  Complaining about situations, dire as they may be, while all around us are examples of provision and blessings.  If we just choose to look around, we would find that there is always a lot to be grateful for, and faith-based and scientific writers alike attest to the power of adopting an attitude of gratitude.

2020 had a last sting in the tail for me – at least I hope it’s the last.  Some significant work that I was fairly certain of for 2021 got postponed indefinitely.  So I look at the picture above, which is in my reflection corner at home, and realize I again have a choice.  Do I focus on lack, or do I focus on the Lilies of the Field?

It’s a no-brainer.  I won’t be delving into the world of state capture, anti-maskers, anti-vaccers, anti-Trump, anti-Biden, anti-everything that the news channels pedal.  There’s no life there.  I’ll be focusing on family, a life-partner straight from heaven, my little home in a seaside village, and the knowledge that I have never been without.

But that’s me. What will you focus on, going into 2021?  Will it be life-giving or life-sapping?

And now for an ad break.

Decision Point is available at the following outlets:

If you are interested in what Decision Point is all about, and to see a cool video of how a book is planned and manufactured, click here. 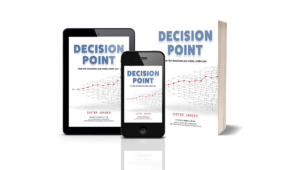